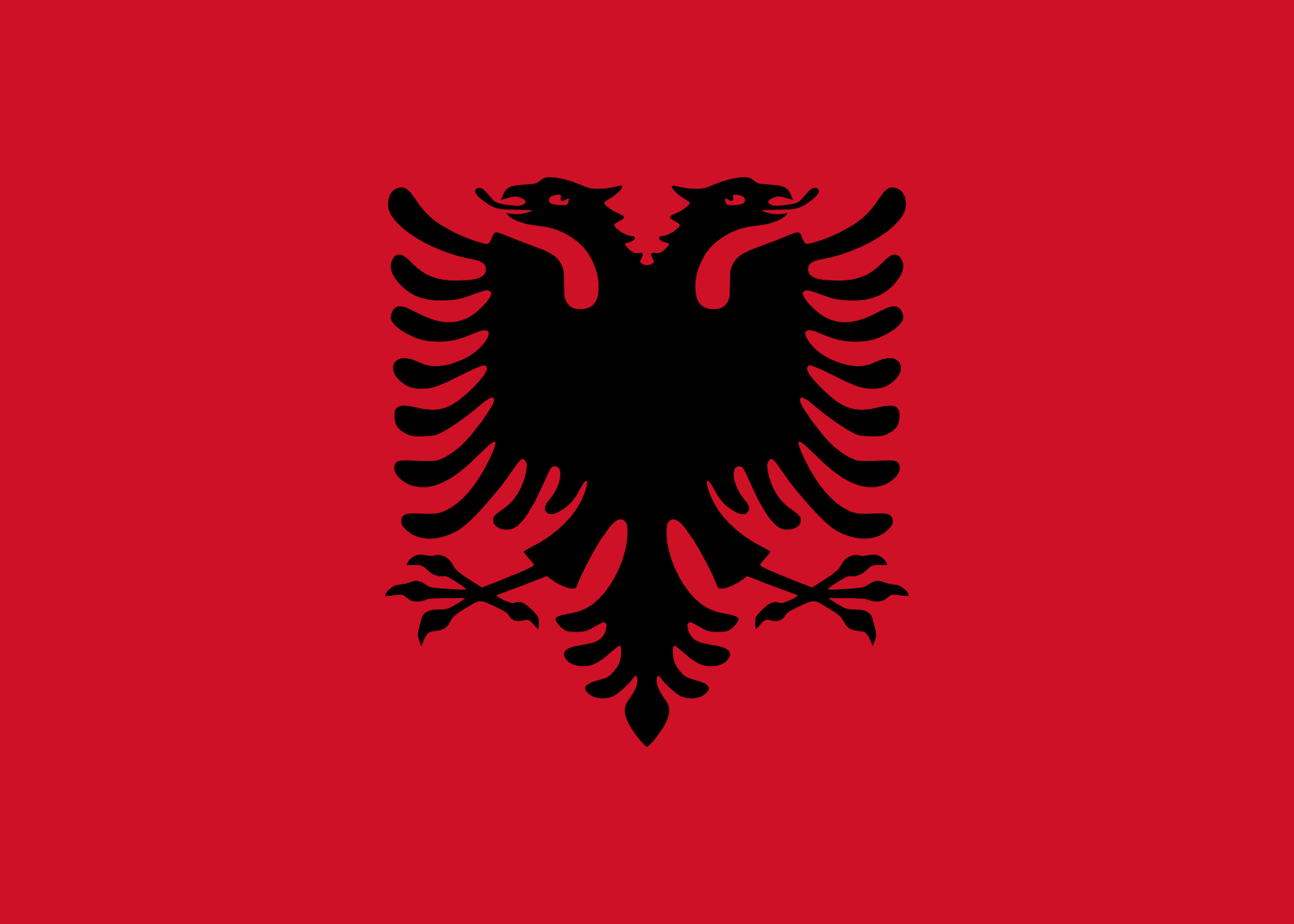 Albania Flag Meaning
The red color on the national flag of Albania symbolizes courage, strength and courage. Red is the color of blood, vital force, and is found on the vast majority of national flags. This color often symbolizes revolution or bloodshed by the martyrs.

The two-headed eagle located in the center of the national flag of Albania is an ancient symbol, used in flags of the Byzantine Empire in the year 1100 and probably since before. It was the imperial symbol of Vienna, Russia, Prussia and the Holy Roman Empire. Drawn in black on the Albanian flag, it comes from the heraldic weapons of the national hero, Georgi Castriota (known as Skanderberg), who led the revolt that led to the independence of the Albanians of the Ottoman Empire in 1443. In flag symbolism, Says the black color represents determination and defeat the enemy.

Albania Flag History
From this flag, in which you can see a two-headed eagle on a blood-red background, many things can be said. To begin with, it must be said that the word used to describe Albania in the native language is Shapiperi, which literally translates as Land of Eagles. Apparently, in the oldest stories of the region there is talk of a ruler known as The Eagle, who still guides and watches his people from the air.

As for the eagle having two heads, this is due to a really ancient symbol used on the flag of the Byzantine Empire, which was used by the same Gjergi Kastriot mentioned above. However, it is not ruled out that this emblem was used much earlier, since it was also established as an imperial symbol for houses such as Vienna, Russia, Prussia and even the Holy Roman Empire.

The color black is also not casual, because it is said that this tonality represents a great determination and augurs the defeat of the enemy. Also, that the black eagle rests on a red blood background is also not casual, because this color symbolizes the bravery, strength and courage of a people. It is a color enough used in the national flags; and is that often involves revolution and bloodshed, a tribute to the fallen during history and a remembrance of the nations conquered and wars won.

The version we can see today lacks elements that were formerly seen; and is that, as in other countries, every time there was a government change the flag was changed. Thus, it has passed from republic to kingdom, has been occupied by Italians and Germans, among others and has also been proclaimed as a Democratic Republic and People’s Republic. All these changes also bring us different flags, which in the end have remained in what we see today; and the fact is that the flag of Albania has not changed its original idea, that of the two-headed eagle on the red background.

Distance From Wukari To Abeokuta

Distance From Awka To Suleja

Distance From Ado Ekiti To Gusau

Distance From Ise Ekiti To Nnewi