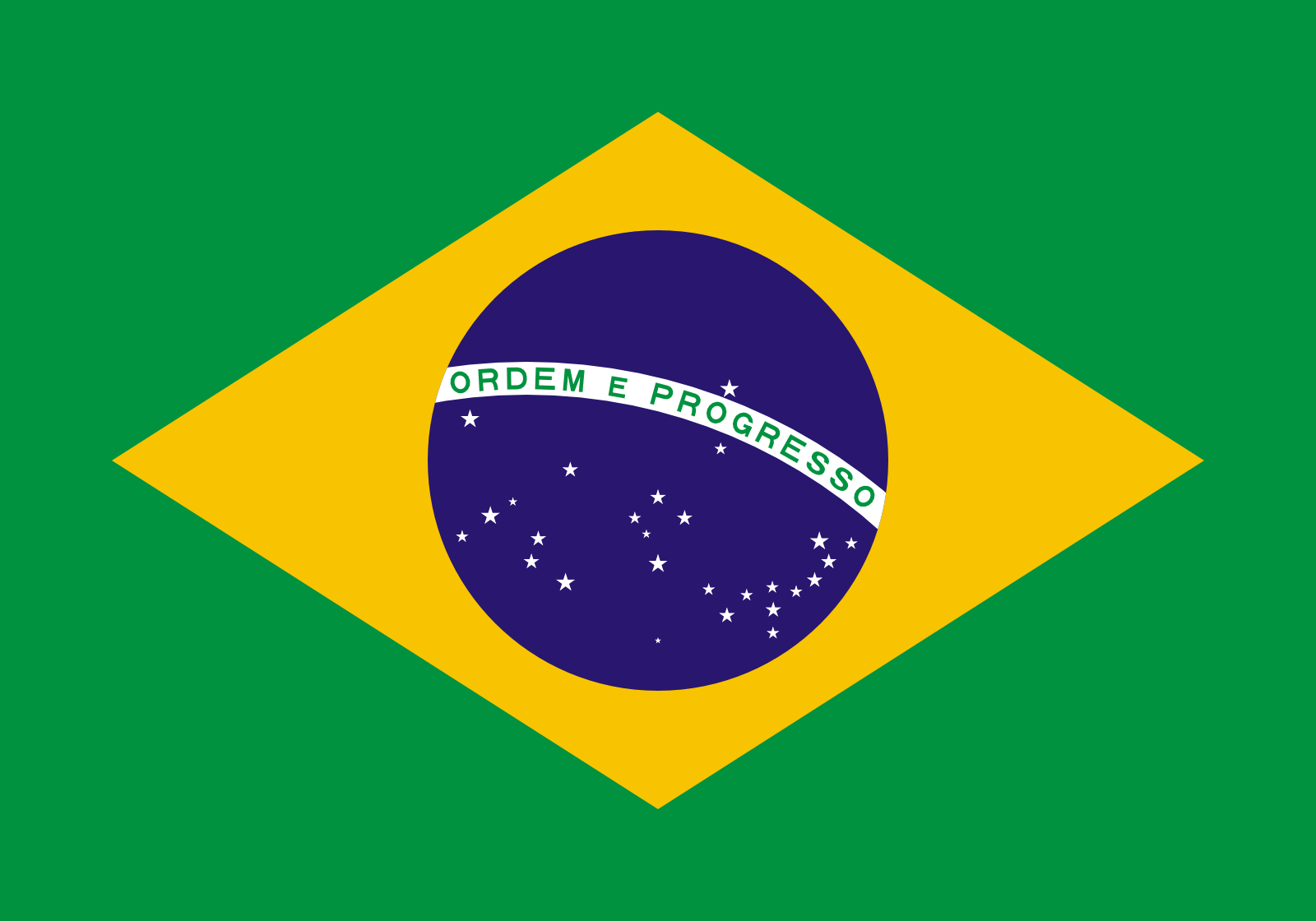 Brazil Flag Meaning
In the national flag of Brazil green and yellow colors which according to Teixeira Mendes, represent the industrial aspect of Brazil as they characterize all the productions of organic and inorganic nature. The globe remembers the sphere that appeared in the flag of the principality Honorific of Brazil. The stars symbolize the Brazilian states; Are unequal stars, whose position are not arbitrary, but reflect an aspect of the sky, in Rio de Janeiro, on November 15, 1889 and where the constellation Cruzeiro do Sul (Southern Cross) stood out. At present the stars are 27, representing the 26 states and the Federal District (Brasília).

Brazil National Flag
The national flag of Brazil was adopted by Decree on 4, November 19, 1889, four days after the proclamation of the Brazil Republic, and replaced the old flag of the Empire. Its creators were Benjamin Constant, Teixeira Mendes and Pereira Reis, with design by Decio Vilares.

The national flag the Brazil kept the green and yellow rectangle of the old flag, replacing the crown of the monarchy with the blue sphere crossed by a white strip, inclined from left to right, with the inscription “Ordem e Progresso” in green letters, counting Today with twenty-six stars arranged below the couplet and one above.

At first, the stars were 21, by the 20 existing states at that time, plus 1 by a municipality nuetro (then Distrito Federal). In 1960, when the capital of Rio de Janeiro was transferred to Brasília, another star was added, representing the State of Guanabara. In 1962 another is added to raise the State of Acre Territory. Rondonia happened to be State in 1986y and is divided in two the one of Mato Grosso, emerging Mato Grosso do Sul. In 1988 Roraima and Amapason elevated to state, being created also the one of Tocantins. This completes the 26 States.

“Ordem e Progresso” is a positivist motto that shows the repercussion of the philosophical ideas of Augusto Comte in Brazil, at the end of the 19th century. It is the simplification of the phrase: “Love by principle, order by base and progress at last”.

The Brazilian flag must obey to rigorous proportions, both as regards the size of the various elements that compose it as regards the position of the same.

Brazilian Flag History
The national flag should be hoisted solemnly, from sun to sun, allowing it to wear at night as long as it is properly illuminated. On holidays or national mourning, it is compulsory for all public offices, educational establishments and trade unions. In public or private schools, it is compulsory to raise them solemnly, during the school year, at least once a week.

On November 19 of each year (Flag Day), the raising and lowering of the national flag takes place at 12 and 18 hours, respectively, with special solemnities.

Paris Club Refund – How Much Each State / Individuals Got

Distance From Sapele To Mubi

Distance From Benin City To Lagos