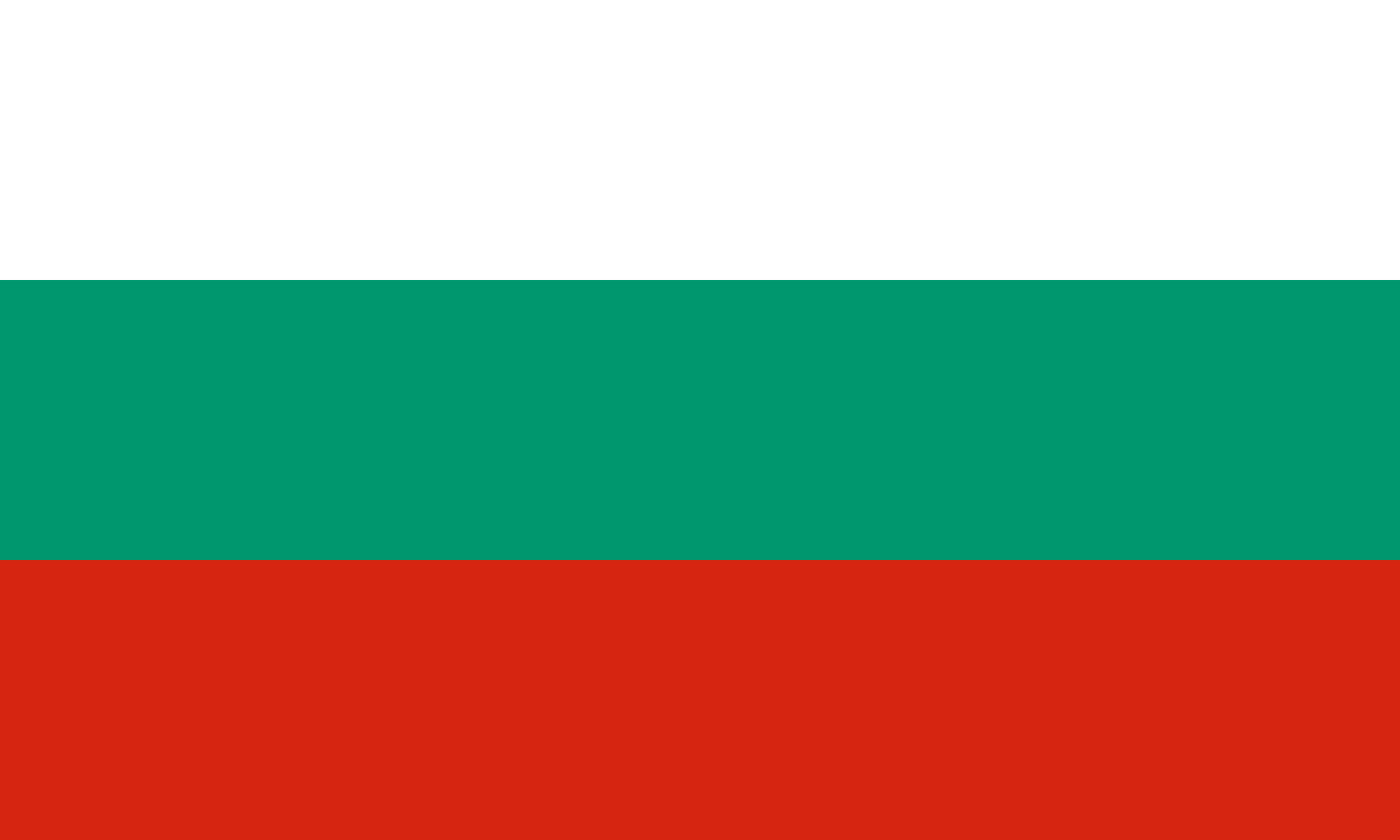 Far ago, in the 1860’s, the Bulgarian Legia, a revolutionary group founded in Serbia by Bulgarian emigrants, used a flag in green, white and red colours. In the war against Turkey, S. Paraskevovo made the first white-green-red striped flag and it was presented to Russian-Bulgarian troops in the Romanian town of Braila in 1877. It had a lion and the word “BULGARIA” in the centre, in Cyrillic characters. It is called the “banner of Braila” and is currently kept in the War Museum in Sofia.

The Flag and the Colours
The Bulgarian flag today has a trio of equally sized horizontal bands: white on top, green in the middle, and the band at the bottom is red. This simple symbol was adopted in recent years, and the national emblem was placed on the hoist side of the white stripe. The national emblem consisted of a five-pointed red star above a lion wearing a wreath of wheat ears. Beneath the lion was a ribbon with the dates 681 and 1944. That symbol has since been removed.

However, some other “national flags” co-exist, some of them really more elaborate, for certain official events. As strange as it may appear for the nationals of other countries, there is not such a thing like a “state flag”. Nevertheless, all the different designs share the same colours, white, green, and red: National Flag, Naval Ensign, Naval Jack, Coast Guard Ensign (Government Flag), Presidential Flag (with the coat of arms on it).

Historical Constitutional References to the Flag
The first reference to a national Bulgarian flag, goes back almost 130 years ago, on the First Constitution in Bulgaria adopted on April 16th, 1879, which states in its article 23 that the national flag would be of three colours, and contain three strips in white, green and red colours. The article makes no reference to measures or proportions, but the reader can figure out a flag that would be similar to the one used in the country at present.

After that, the 2nd Bulgarian Constitution, adopted on December 6th, 1947, modified first the flag. The coat was added on the white stripe, as stated by its 97th article, which says that the Bulgarian flag would be of three horizontal stripes in white, green, and red. The coat of arms would be located in the left upper corner.

A new Constitutional amend, in fact the 3rd Bulgarian Constitution, in force since May 18th, 1971, confirms in article 141 the design that had been adopted by the Constitution in 1947, but the text was changed on November 27th, 1990. Since then the article states that the Bulgarian flag would contain three colours, horizontally placed in this order from top to down: white, green, and red. There is no mention of the coat of arms.

That text was enforced until the adoption of the 4th current Bulgarian Constitution in since July 13th, 1991. The constitutional specifications in article 166 state that the flag of the Republic of Bulgaria be of three colours: white, green, and red from the top. Each stripe would be placed horizontally.

However, there were further regulations stated by the Bulgarian State Seal and National Flag Act, stating that the three strips must be identical in both form and size. Those regulations state that the flag’s measurements and form must:

Distance From Warri To Ogbomosho

Who Invented U Haul And When

List Of Towns And Villages In Konshisha L.G.A, Benue State

Distance From Offa To Minna