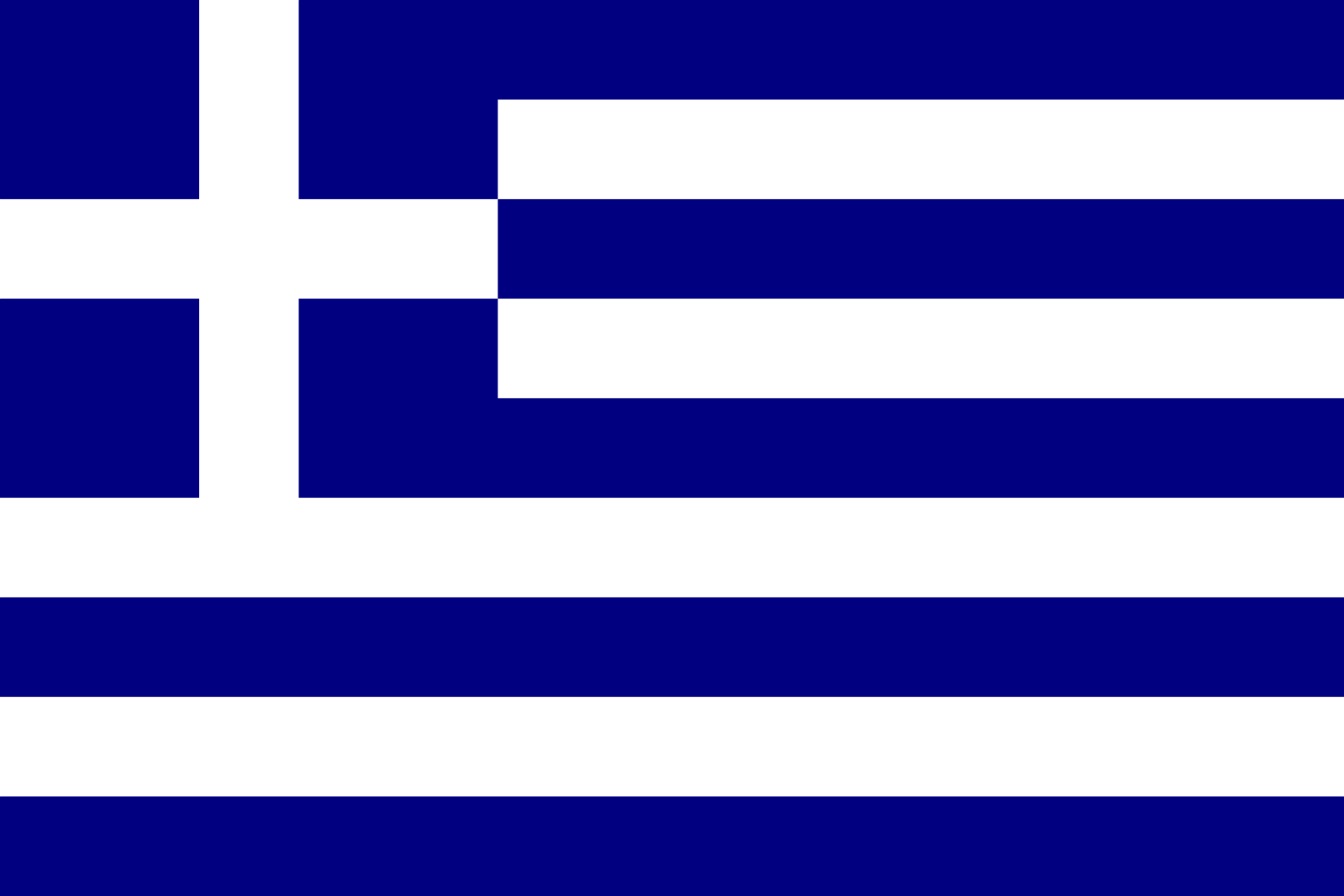 Greece National Flag
The national flag of Greece consists of nine horizontal stripes of blue and white of similar dimensions. The blue strip at the top alternates with the white strip. In the upper left is a blue box with a white cross.

Parts of the Flag of Greece: To reach the current national flag of Greece, there were other flags that were used at different times and events. There was a flag with an eagle, another with images of saints and slogans that symbolized the rebirth of the Greek country, as well as Christian things. Some were used by local Greek leaders. One of them was the Graikothomaniki flag, which combined stripes of red and blue. Red symbolized the Ottoman Empire.

In 1769 the flag that had the blue cross in the white part was used by some military leaders during the revolution of 1812. It is important to know that in the year 1800 there was a soldier named Yiannis Stathas who used a flag with a white cross in a blue part in his ship, design flag similar to the current one.

Over time, in 1822 some eminent politicians of the provisional government that was in Greece decided to take drastic measures to suppress all the revolutionary flags to be able to create and to adopt one like national symbol of the country.

The new national flag was to be used by military, ministries and embassies. The naval flag that existed only had to be used by naval, mercantiles, consulates and some inhabitants.

After the restoration of the monarchy on October 10, 1935, the image of the crown was added to the flag of the country. Nevertheless time later the military dictatorship of 1967 returned to remove the crown of the flag.

The naval flag was named as the only national and official flag in 1969. It should be noted that the pattern of crossed fringes is a national emblem of Greece.

Greece Flag Meaning
The white cross that is in the blue box at the top left symbolizes the prevalent and popular religion of the Greek Orthodox Church. The nine stripes of the Gracia flag represent the total syllables of the national motto. Its meaning in English is “freedom or death”.

This slogan was a cry of Greek Independence in the Hellenic Revolution of 1821 during the time of the occupation of the Ottoman Empire. It is important to know that Greece had its independence after remaining some four hundred years under Ottoman rule.

It is crucial to know that the number 9 is traditionally the number of “reference” for Greek inhabitants by its 9 famous muses.

The colors blue and white symbolize the sea, the waves, the sky and the clouds. They also represent the traditional colors found in Greek dresses.

Distance From Akure To Lagos

Distance From Benin City To Omu-Aran

Distance From Garki To Ilawe Ekiti